An artistic blend of Dravidian and Islamic styles. Thirumalai Nayak Palace is a place worth admiring and exploring when on a Madurai Tour. It was built in 1635, by the King Thirumalai Nayak who had the vision of creating a masterpiece for royal stay. It was designed as a residence for the king by an Italian architect. This palace is a must visit for history lovers and those who love to explore architectural fineness of bygone eras. The sound and light shows are conducted every evening at the palace, making your trip to this palace even more exciting. Now under the protection of Tamil Nadu Archaeological Department, this palace was declared as a national monument immediately after independence. 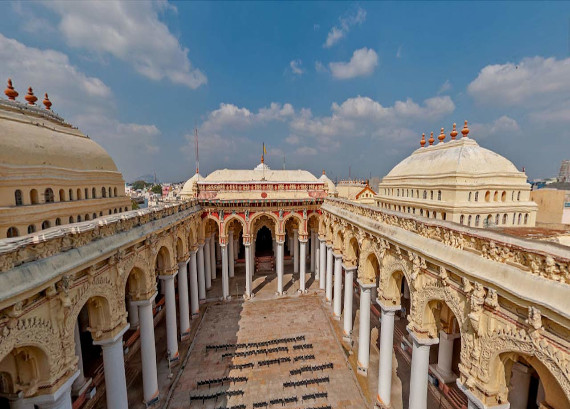 Now a popular sightseeing place in Madurai, Thirumalai Nayak Palace was constructed as a residence for the then King Thirumalai Nayak in 1636 AD. It is said that King had recruited an Italian architect for designing this palace. This palace which was apparently four times bigger in its original form than the present structure had seen many destructions over the passing decades. It is said that grandson of King Thirumalai Nayak had dismantled this palace to a larger extent, leading to distortion of its intricate design. His grandson had removed precious jewels and exquisite woodcarvings from this palace in order to build his own place in Tiruchirappalli, although he could never materialise his dream of building a grander palace.

However, later during the years of 1866 to 1872, this palace was partially renovated by the then Governor of Madras, Lord Napier. Currently, after many stages of restoration work over many years, tourists can see entrance gate, the dance hall and the main hall.

Thirumalai Nayak Palace, which was built with the intention of creating a masterpiece for the then King to stay is undoubtedly one of the best architectures of ancient times. Designed by an Italian architect, this palace is a blend of Dravidian and Islamic architectural styles. The interiors of this palace mesmerises everyone with its intricate paintings and sculpting. Paintings on the roof of the palace are worth noticing.

Currently only a few parts of the palace has remained. Most of the parts of this magnificent palace was distorted and taken away during various reigns with changing times. This palace was built with foliated brickwork, while the polished texture of the palace came from the use of chunnam which is a combination of shell lime with egg white. This palace is known for its majestic pillars, with height of about 82 feet and width of almost 19 feet. As you enter the palace through its grand gates, you will reach a central hall with many massive pillars. This central courtyard is about 41,979 sq ft and has a circular shaped garden which is one of the major attractions here. Along with courtyard, the dancing hall of the palace is also worth exploring.

Swarga Vilasam and Ranga Vilasam are two major sections in which Thirumalai Nayak Palace can be divided. These two sections comprises of royal residence, quarters of workers, auditorium, religious places, ponds and gardens, queen’s harem, etc. Swarga Vilasam or the Celestial Pavilion was used to be the throne room. One can also see the decorated throne of Nayak King. It has an arcaded octagon which is covered by a dome of about 70 feet which is supported by huge columns of circular shape and stone ribs. These columns are linked by arches and an arcaded gallery.

Thirumalai Nayak Palace timings are from 9 AM to 5 PM. It is open for tourists on all days of the week. The lunch break at the palace is from 1 Pm to 1.30 PM.

Located at a distance of only 1.2 km from the Madurai Meenakshi Temple, this palace is easily accessible via road. Thirumalai Nayak Palace is situated about 3 km away from Madurai railway station while from Madurai airport, it is about 10 km away. Tourists can either hire a cab or take one of the locally run auto rickshaws to reach this palace. They can take buses that run at regular intervals.