One of the prominent religious shrines. Thiruparankundram Murugan Temple is among the 6 temples of Lord Murugan, called as Arupadaiveedu. This temple has been carved out of a mountain by cutting rocks adding on to its overall magnetism.

Thiruparankundram Temple was built in the 8th century during the Pandyan reign. This temple, with its shrine carved out of a rock, has separate shrines for Lord Shiva, Lord Vishnu, Goddess Durga, Lord Vinayaka and of other prominent Hindu deities. This temple, which is also historically important, is known for a special feature. In this temple, idols of Lord Shiva and Lord Vishnu face each other, which is a unique aspect in a Hindu temple. From this temple, sun and moon can be seen together, which is a major attraction among devotees. 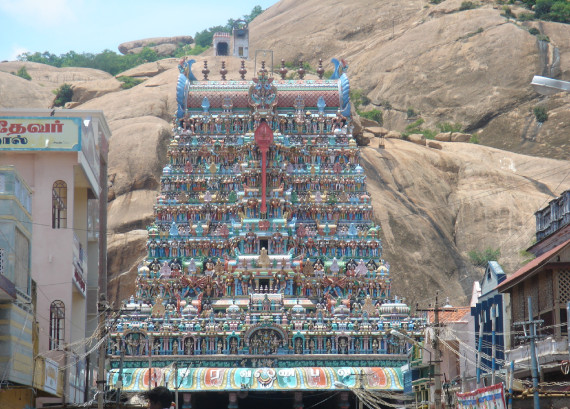 This temple is among the six main shrines of Lord Murugan who is also known with the name of Subramanya. According to legends, at this place Lord Muruga has married Goddess Deivyani/Devasena who is the daughter of Lord Indra. This is the reason why this temple is considered to one of the most auspicious places for marriages. It is believed that the couples who get married here get the blessing of Lord Muruga for a happy and successful married life.

A striking feature of this temple is that it is visited not only by Hindu devotees but is also visited by those with other religious beliefs. A Muslim shrine named Sekunder is also located here. This shrine is also associated to Lord Murugan according to some legends. It is popularly believed that Sekunder was a friend of Lord Muruga.

This temple not only attracts devotees for its religious significance but also mesmerises every visitors with its architectural beauty. The structure of the temple can be mainly attributed to Pandyan reign and Nayakar rule. Carved out of rock, this temple was built during Pandyan rule while the massive mandapams of this temple were built during the Nayakar reign.

The innermost shrine of the temple which has been cut out of a rock consists of sanctums of Lord Shiva, Lord Vishnu, Lord Vinayaka, Lord Subramanya and Goddess Durga. All the idols have been artistically carved on the walls of Parankundram rock, presenting an enthralling and intricate craftsmanship that existed during the Pandyan period. The presiding deity of this temple is Parangirinathar, one of the names of Lord Shiva with his divine consort Goddess Parvati as Goddess Aavudai Nayaki. Outside the sanctum, devotees can see carvings depicting Lord Shiva in various dance forms. Along with the idols of Lord Shiva and Lord Vishnu facing each other which is indeed a unique site, another special feature of this Lord Murugan temple is the magnificent statue of Nandi, Mayil and his vehicle Mouse that have been artistically carved. It is located in the front of Kodi Maram. Tourists can also see carvings of Mahishasura Mardini, Karpaga Vinayagar, Andarabaranar and Uggirar on the rocks.

This temple has distinguishably artistic mandapams as well. Aasthaana Mandapam is one of the most attractive parts with various exquisitely carved pillars. Others mandapams such as Kambathadi Mandapam, Maha-mandapam and Ardha Mandapam are also worth noticing.

Thiruparankundram Murugan Temple opening timings are from 5 AM to 1 PM. It again opens for devotees in evening, from 4 PM to 9 PM. This temple is open on all days of the week.

One of the best times to visit this temple is during the month of March and April when a 14 day festival is celebrated in the temple. The victory of Lord Murugan where he defeated Demon Suran and his divine marriage to Devasena is celebrated during this festival with great fervour.

Thiruparankundram Temple is located at a distance of 10 km from Madurai city. From Madurai to Kanyakumari road, it is about 7 km away. Tourists can either hire a cab from Madurai to this temple or travel via public transport. Many buses run from Madurai to here at regular intervals.